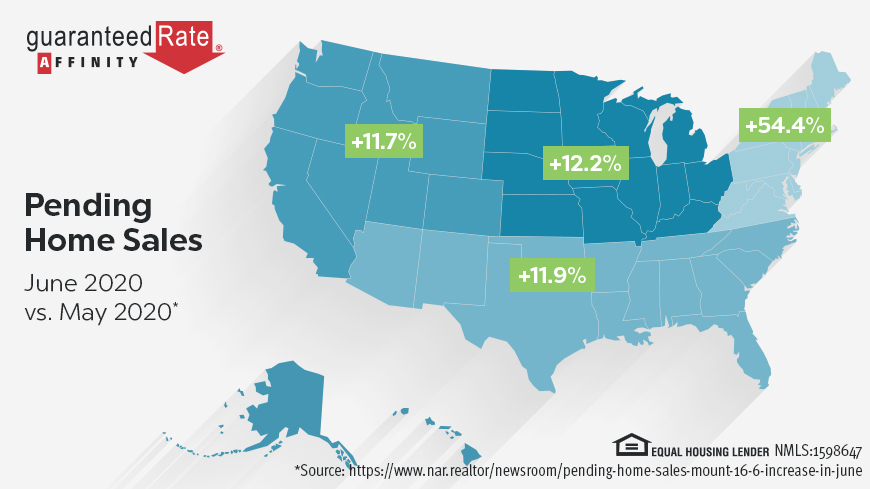 Marking the second consecutive month of increases in contract activity, the Pending Home Sales Index (PHSI) rose 16.6 percent to 116.1 in June. Year-over-year numbers increased as well, with contract signings up 6.3 percent. For context, an index of 100 is equal to 2001’s level of contract activity.

“It is quite surprising and remarkable that, in the midst of a global pandemic, contract activity for home purchases is higher compared to one year ago,” says Lawrence Yun, NAR’s chief economist. “Consumers are taking advantage of record-low mortgage rates resulting from the Federal Reserve’s maximum liquidity monetary policy.”

Because of this market turnaround, NAR has raised its market forecast—predicting existing-home sales to decline by only 3 percent for all of 2020, with new home sales projected to increase 3 percent.

Growth across the regions

Each of the four major regions experienced month-over-month growth, with three of the regions increasing year-over-year numbers as well.

“The Northeast’s strong bounce back comes after a lengthier lockdown, while the South has consistently outperformed the rest of the country,” explains Yun. “These remarkable rebounds speak to exceptionally high buyer demand.”

Yun anticipates house hunters looking for homes away from bigger cities, noting that properties that were previously overlooked are now growing in popularity, as buyers attempt to avoid the coronavirus.

Data from realtor.com® highlights metros with suburbs that have seen some of the highest gains in rankings:

Yun is hopeful for continued growth but cautions that homebuilding needs to remain affordable.