Existing-home sales with a surprise turnaround to start the year 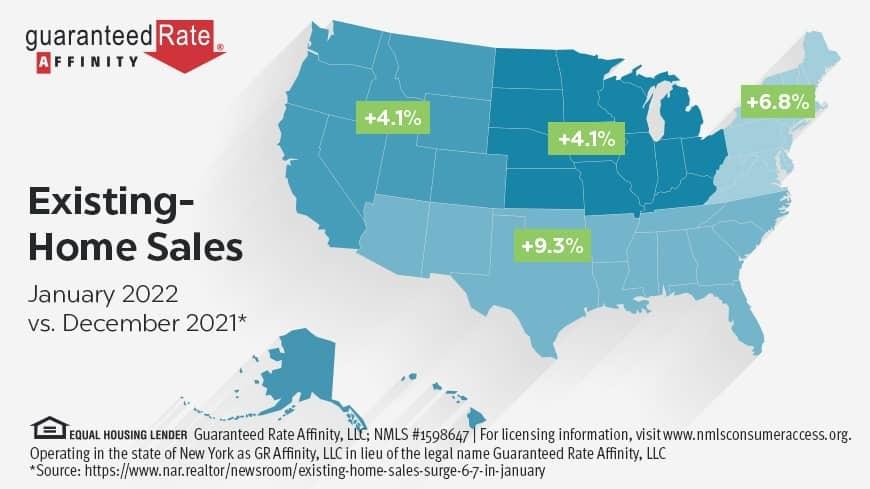 Despite many factors working against the current housing market, existing-home sales in January were up nationwide, with every region showing an increase from December. Year-over-year activity was more mixed, with two regions showing sagging sales from January 2021, but it was an encouraging report for sales activity when so much of the narrative had been negative.

Total existing-home sales climbed 6.7% in January to a seasonally adjusted rate of 6.5 million. Compared to last year, sales fell 2.3%. These gains are in spite of the fact that total housing inventory amounted to just 860,000 units, which is down 16.5% from a year ago.

“The inventory of homes on the market remains woefully depleted, and in fact is currently at an all-time low," said Lawrence Yun, chief economist at the National Association of Realtors®.

Homes that are listed below $500,000 are becoming extinct in the current market. That pressure on the homebuyers shopping that category of home, including first-time homebuyers, is forcing many of them to sit out the current cycle. They were responsible for 27% of sales in January, down from 30% in December and down from 33% in January 2021.

"There are more listings at the upper end – homes priced above $500,000 – compared to a year ago, which should lead to less hurried decisions by some buyers," Yun says. "Clearly, more supply is needed at the lower-end of the market in order to achieve more equitable distribution of housing wealth."

So what led to the increase last month in spite all of these negative metrics? It’s like we learned in elementary school math, a negative times a negative makes a positive. In this case, the other negative at play here is rising mortgage rates.

Demand is not going down, and real estate investors are adding to the issue by snapping up properties with all cash offers. And this is having the expected affect on home prices: they’re heading up, up, up.

For the 119th month in a row, median existing-home prices rose, continuing an all-time streak. The median existing-home price for all housing types in January was $350,300, up 15.4% from January 2021 when they stood at $303,600. The typical property stayed on the market for 19 days, and 79% of homes were on the market for less than a month, which confirms that we’re still in a seller’s market.

Predicting the impacts of raising rates

Yun and most market watchers have noted that the mortgage rate increases we’ve seen over the last few months will likely continue for a while, and that will impact who’s able to buy.

"First, some moderate-income buyers who barely qualified for a mortgage when interest rates were lower will now be unable to afford a mortgage," Yun said. "Second, consumers in expensive markets, such as California and the New York City metro area, will feel the sting of nearly an additional $500 to $1,000 in monthly payments due to rising rates."

More and more, investors and current homeowners looking for a second home are driving sales and setting the market. Not coincidentally, these are the groups that are likely to make all-cash offers. These buyers made up 22% of sales in January, up 5% from December and 7% from a year ago.

Existing-home sales across the regions

All four regions saw increases from November, though year-over-year numbers were down in two of the regions.

"The migration to the Southern states is clearly getting reflected in higher home sales and fast rising home prices compared to other regions," Yun concluded.