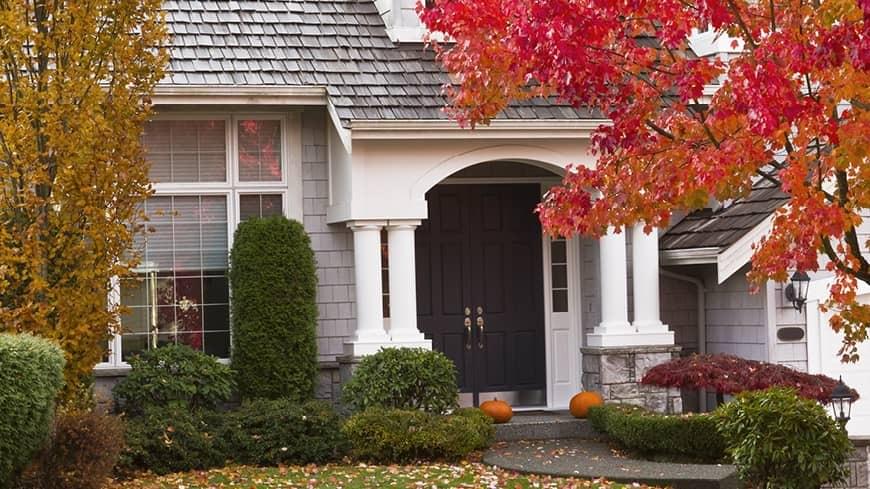 Though we're still feeling the summer heat outside, Fall is on its way. Typically a literal and figurative cooling off period for the housing market, this year has been full of surprises. To put it mildly, 2022 has certainly been anything but ordinary.

Truly no one can be exactly sure what such a year like this one may hold in store for us, and we don't have a crystal ball. However, we can forecast how we think things will turn out based on our experiences and by watching industry trends.

With that in mind, we've put together a list of some of the things that potential homebuyers may have on their minds as we move into the autumn months. We'll take a look at where we've been, where we are and, perhaps most importantly, where we believe we're going.

Where are rates going?

Mortgage rates vs. the FED

It's important to understand that, while they are definitely linked, the interest rate set by the Federal Reserve (FED) and mortgage rate aren't a 1-for-1 increase, and are subject to any number of different factors, such as the type of loan you want to pursue, the bond market and your personal credit score, just to name a few. Having said that, when you see the FED raise rates, it's a safe bet that some increase in mortgage rates may soon follow.

This year has seen mortgage rates increase, that's true, but it's not always been a straight upward climb. Much like a rollercoaster, rates may have already hit something of a plateau for the year, but don't expect the exhilarating plunge back down to 2021 rates anytime soon.

At the time of this writing, a 30-year fixed mortgage is just under 6%. Market volatility due to inflation and uncertainty may push that back up to around 6% or higher, so you might see the roller coaster creep back up the curve to find another peak down the line. With so many unknowns, it's impossible to say for sure what it will do, so strap in and get ready for the ride.

Managing what you can control

The best defense against rising mortgage rates is to concentrate on those things that affect your rate that are within your power to affect. A short list includes, but is not limited to your:

Bottom line: It can feel like you're powerless on the seas of a storm-tossed market, but you have more control over the situation than you might think. Talk to one of our mortgage professionals. They can help you navigate through the torrent of the current market.

Are we in a recession?

What is a recession, exactly?

For such a simple question, the answer is more complex than you might expect. Let's start by defining what a recession is. Normally, a recession is when the Gross Domestic Product (GDP) of a country reduces over two consecutive quarters. GDP is a comprehensive measure of economic activity, and thus a key indicator of the overall health of the economy it represents.

So, where are we at the moment? Well, according to the Bureau of Economic Analysis (BEA), the GDP for Q1 of 2022 decreased by 0.9%. At the time of this writing, the official report for Q2 has not come out, but the BEA is estimating that we'll see a 1.6% decrease. If that proves true, that's two in a row. Is that proof positive that we're in a recession? Strangely, there's more to it than that.

The August jobs report recently came out, posting far higher job growth than expected. July saw some 528,000 jobs with unemployment lowering to 3.5%. The unemployment rate is another key factor in determining whether we're in a recession, and generally the lower it is, the better.

Once again, the numbers alone don't tell the whole story. This also speaks to a broader trend that we're seeing in a great many markets, including housing — unpredictability. The current economy is subject to numerous, often counter-intuitive stresses and pressures. From the lingering effects of the Covid pandemic, to the sanctions against Russia, to climate change and more, the result is a strange blend of historic circumstances that shouldn't necessarily be taken at face value.

That said, the jobs report is certainly good news, but goes to show that there's an upside and downside to just about every bit of economic data. Besides the perennial 'seasonal adjustment' that can sometimes distort numbers at this time of year, the New York Times predicts that this much high employment could actually drive up inflation as more dollars are pumped into an already inflated economy. We'll talk more about inflation a little later.

Who has the final word?

Alright, so the GDP is down, but so is unemployment. Where does that leave us? Who has the final say on whether we're in a recession?

As it turns out, the National Bureau of Economic Research (NBER) is the organization that has the official say on whether we're truly in a recession, and they have not yet announced one. That doesn't mean that they won't later this year, or when the official Q2 report comes out.

So, all this has been to give an answer to our original question: Are we in a recession? Technically, no, as the NBER has yet to rule on it. Still, we have to qualify this by saying that there are certainly indications that one may be on the horizon if it's not already here.

Bottom line: Better to brace for a downturn that never comes than to be caught unprepared by one that does.

What's the deal with inventory?

A lack of inventory has plagued virtually every housing market across the country, and it's been an issue to a greater or lesser degree for years. The situation has only compounded upon itself in a number of ways. What brought us to this point? There's no one easy answer, but let's explore some of the things that have contributed to the lack of inventory we're seeing today and talk about what the future might hold.

When the pandemic hit in March of 2020, the economy took an immediate dive as whole sectors of industry had to shut down or greatly reduce capacity. Jobs hemorrhaged and margins were slashed.   This included work crews responsible for building new houses. Building materials of every kind, but particularly wood, went up in price as less of it was available. So, we had fewer new houses entering the market.

At the same time, the interest rate dropped to help stabilize the economy and encourage borrowing, which it certainly did. Couple that with a rising demand for more space brought on by many jobs moving to a work-from-home status, and you suddenly have a situation where demand and accessibility far, far outpace availability. It was (and still is) a recipe for a seller's market.

Signs of cooling down

The market was red-hot for more than a year, with record property values and an equally meteoric rise in housing prices. Now that the mortgage rates have increased, that has pumped the brakes if just a little. Make no mistake, the housing market is still going strong, but little by little markets are coming down from the runaway 'fever pitch' that we saw during 2020 and 2021.

While materials and labor shortages still abound, the situation is not as extreme as it once was. That means that housing builders may have a bit more breathing room to deliver more homes onto the market. It will be a long time before the supply ever really catches up with demand, but perhaps the difference will not be quite so extreme.

Realtor.com recently reported that the national inventory of active listings increased to a record high of 30.7%, however, in a separate article they also warn that housing builders may still not be able to keep pace with the built-up demand as their pace slows in some areas.

Ultimately, the market going forward may see an increase in buyer options without as much need for waitlists or bidding wars but expect it to remain extremely competitive for the foreseeable future.

Bottom line: Even with rising interest rates, the demand for homes is still widespread. That's not likely to change any time soon.

What factors will affect the economy?

The housing market and the economy often go hand in hand. Forces that affect one are bound to reflect in some way on the other. Here are some of the market pressures that will likely have an impact on the economy, and the housing market, going forward.

This one cannot be overstated. Since inflation affects the value of goods at practically every level of the market, it has a way of exacerbating nearly every angle of the economy, from rising prices to overall affordability. While measures such as the Inflation Reduction Act are near to becoming law, it will take some time for the effects to be felt by the average American.

We often speak of the pandemic in the past tense, but Covid-19 has certainly not gone away. It’s still a concern that could affect still affect both the workforce and the supply chain — both things that we've established have a domino effect on almost everything adjacent to them. Add to that the rise of monkeypox, as well as a host of other ailments as we move into what is historically flu season, and there’s a myriad of ways that public health can play a role in the economy.

Gas prices have come down off the ledge, but they are still running high. That one expense alone is subject to any number of international factors, including the current war in Ukraine and the resulting sanctions against the Russian Federation.

Rising tensions with China over Taiwan, as well as China's own lockdowns and downturns, have the potential to affect of price of goods as, overwhelmingly, most manufactured products that we find on shelves here are made over there.

Bottom line: In such an interconnected global economy, ripples on the other side of the globe can have lasting repercussions on American pocketbooks over here.

Is it too late to buy in the fall housing market?

The short answer: No, it's not. While interest rates have gone up, they are still low if you look at where they have been historically. With more options opening up to potential homebuyers, in a market that is competitive but not a blazing 5-alarm fire, some of the power that seller's have enjoyed over the last 18 months may start trickling down to buyers. This gives home hunters an opportunity to pursue the American Dream with gusto, while also experiencing more agency in seller negotiations.

While there is still no small amount of uncertainty in our future, forewarned is forearmed. We hope that with this knowledge, you can prepare your finances, your FICO score and your lifestyle for a home. It really boils down to you. If you want to become a homeowner, understand that this is within your grasp. It is achievable, and we're here to help. If you're ready to embark on this rewarding journey, have a chat with our loan experts to find the program and products that are right for you.